In this feature series for All Yoga, Coach & Author Jeff Grant shares stories from 20 years of yoga practice, its impact on his epic endurance sports pursuits and careers in both international corporate work and coaching.

Yoga is a constant force of good that has carried him through major weight loss, extensive international travel, and extreme endurance challenges, such as a 37-hour long mountain run in the Swiss Alps.

I attended my first yoga class 20 years ago as an injured triathlete looking for some relief from my various training and overuse ailments. This was back when we’d find local businesses in the Yellow Pages — a large printed book of business phone numbers, so I looked up “yoga” and selected the nearest studio. That was the extent of my research.

I walked into that first class dressed to run, with no mat and no clue what was about to happen. I was the only man in a class full of women who were at least twice my age. The style was introduced as Hatha Yoga. I had no idea what Hatha Yoga meant and wondered if I would have to sit the whole class in Lotus position, and if so, how I could possibly pull off such a feat of contortion.

I was quite intimidated at first — for several reasons. The first was my self-imposed spirituality shield at the time. I hoped yoga would help with my injuries, but didn’t want the spiritual stuff, especially if it even hinted of religion.

The second was admittedly the coolness factor. At the time, there were no hot yoga classes, yoga set to the latest tunes, yoga for athletes, etc. My triathlete friends were out training on their fancy bikes and carving through swimming lanes at the pool, and in my mind, I was tucked away inside a warm yoga studio surrounded by grandmothers, bolsters, and lavender-scented eye shades. Comfortable—sure. But not so cool for this 20-something triathlete.

The last reason was that the class members seemed to know what they were doing, knew fancy Sanskrit names for a host of poses, and could go into positions far beyond the realm of what I believed my body could ever do.

I kept showing up though, dressed each time in my 1990s runner’s tank top and shorts. With hamstrings so tight I could seemingly barely touch my knees, much less my toes; I was there every Monday evening. While I found the physical relief I was looking for, eventually healed my injuries, and made massive improvements in my mobility, I also discovered a hidden prize: an incredible calming effect after each session.

This calming effect did wonders for my stressed-out IT Project Manager’s state of being. I’d walk in the door after an exhausting, overloaded day at the office and an even more stressful commute, worrying about every project, every email, every detail — and walk out feeling calm, centered and at peace. It happened every time, and every time I’d react with surprise and wonder.

All the items I had identified as intimidators proved non-issues. I found that I enjoyed the elements of spirituality. I discovered that triathletes in general benefited more from training mental stillness than overtraining the body — thus mind training was leading edge and indeed, cool. And I learned that yoga was about an individual’s journey, not about anyone else in the room.

I eventually found myself excited about joining a yoga class for the mental relief more so than for the physical benefits. I also began to run after yoga sessions and I was surprised at how I instantly fell into a state that used to take most of my run to reach, especially after very stressful work days. For me, yoga quickly proved a major contributor to my happy quality of life, as well as my productivity and performance in both sports and career.

Up next in Part 2, I move on from the cozy Grandmother’s class and launch my discovery of other styles of practice by spending 3 days at an Ashram, where I saw my first headstand, didn’t get freaked out with Kirtan and sat quietly for the first time in my life — all still dressed as a runner, of course! 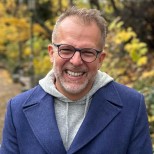 Jeff Grant is the author of Flow State Runner. His passion in life is getting in people's heads and helping them develop a stronger Inner Coach's voice. Based in Switzerland, Jeff has taught yoga, fitness, mental toughness and running around the world. He also loves playing musical instruments, dancing Lindy Hopp and spending time in nature. 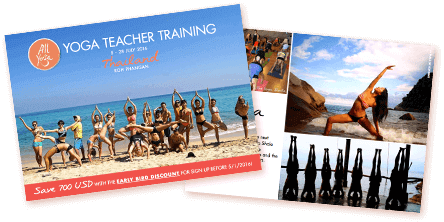